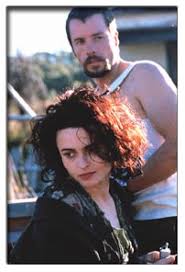 Till Human Voices Wake Us I found while binge looking on Netflix for movies to watch in the future. I knew nothing about it except Guy Pearce’s character, Sam Franks, meets a woman who reminds him of a lost lover from the past. Having Helena Bonham Carter and Pearce attached to the feature I was interested in watching it.
A small Australian film that’s sad but sweet. Movie kicks off with Sam visiting his father in the hospital who passes away while during a game of chess. His father’s wish was to be buried in Genoa, Australia. Sam is not comfortable with the idea because it’s where he lost his girlfriend and buried the thought of it since, but it’s dug up. On the way to Genoa via train, he drops his book and loses his place. A woman picks it up, Ruby (Carter), and finds the place where he left off and hands it back to him. You don’t see Ruby again until later that night when Sam is driving through a storm and sees a woman standing on a bridge about to commit suicide. She jumps in the water and Sam is quick to react and saves her. Upon taking her in his care, she doesn’t remember a thing. Thankfully she’s not crazy or else this could have easily been a horror, having said that, this is hardly an R rated film. This is more PG, anyways, Ruby decides to take a walk outside. Mostly shot during one night, Ruby and Sam embark on a journey that covers the footsteps of the same night the tragedy occurred. From a dance hall to finding a dead bird under a rock seems something like witchcraft and we watch Sam stunned at the turns of the night. Especially when they decide to play a word game like Sam and Silvy, deceased girlfriend, would and repeat the same words. Coincidence? You can’t help but feel for Sam. He’s a man who decided to not have reaction and hold back his feelings for he some what blames the death on himself. We want him to love again, we want him to break out of the unemotional deadlock he carries.
Guy Pearce and Helena Bonham Carter have great chemistry together. Helena is very lively and talkative, while Guy is more restraint and cold. There are some nice conversations to listen to that are accompanied by some good chuckles. The flashback sequences to Sam’s younger days flow nicely with the movie and help explain the story as it unfolds. There are definitely deep themes flowing through the film and are not hard to miss. Ultimately, it’s about a man who must dare to relive his past and only then he is set free. A beautiful movie but something melancholy lingers over the whole thing. Recommended for a slow day or for something to think about.
“If moths are attracted to the light, why don’t they come out in the day?”
” …guess in the day, light comes to them.”
Advertisement