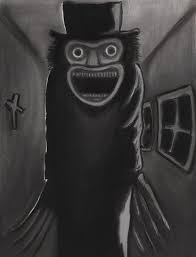 The story is similar to the likes of Insidious and many other scary movies involving a troubled kid and a dark spirit who wants to house your body. What makes this different though is it’s approach. Even though there are some good creepified moments, this movie isn’t all that terrifying. It was more psychological than expected and focused on family values. There’s a lot of build up, too, which made it more of a drama. The ending leaves you a bit unsatisfied seeing that the first 3/4 of the movie promised a strong conclusion. You will be scratching your head. Have you figured it out?
I plan on adding this film to my collection. The Babadook will hook you in to it’s dark atmospheric tale. The build up helps you understand Amelia and Samuel’s situation which is why you care and makes moments more stressful. The mother even becomes scary at a point, but I recommend you watch this just to see how The Babadook stands out from other horror gems. By the way, if you hear three knocks, don’t let it in.
Advertisement