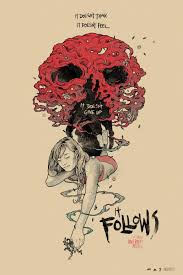 Having heard about this movie last year gave me interest. I didn’t know anything about the movie and I kept it that way; I just knew I had to see it. Come 2015 and it’s granted a wide theatrical release. My moment has come, so I grab a few dollars and head over to my nearest theater where it was about half full (at the time everyone was watching Furious 7). The movie will make a larger effect once it hits home, but probably not so well in theaters. Director David Robert Mitchell has quite a movie on his hands, one that will disturb and terrorize the viewer.
It Follows begins with an anonymous teenager who is in the middle of being ‘followed’. She rushes to her car and makes it to the beach. She sits, waiting in the headlights on the shore expecting her follower to appear at any moment. Next scene she’s all mangled up which shocks the viewer and lets you know what you’re in for. That scene is quite disturbing, but doesn’t end there. The movie has more to offer. The story is about a young girl, Jay, who goes out with this guy, who her friends approve of. We eventually figure out the mysterious stud’s motive: he wants sex. But sex holds a darker secret, he wants to pass on an evil entity so It will stop following him. Douche. He does explain to our misfortunate protagonist that all she has to do is have sex with someone else and pass it onto the next guy. Jay is cute though so it should be easy right? It comes with a catch, you can still see the entity but once it gets a hold of it’s victim and kills them, it will start going back down the line of the previous victims to whoever started the whole thing.
Now, anytime It is present, those are the moments you feel the terror and despair. It’s in it’s presence, the slow but dedicated walk to it’s target like it’s confident it will get you, and it will torment and kill you. The entity takes many forms, strangers or close acquaintances, and not always is it the center of the frame. Sometimes you can catch it walking in the background, still making it’s steady pace, but when the entity is in focus, terror reigns. That is one thing I love about this film is that Mitchell directs every scene as it is. Like when the entity breaks through the kitchen window and walks toward Jay…just disturbing. I felt her fear. There is something artful about It Follows and I like it.  The scares are slowly built up and the jumps come fast.
The film would be much less if it wasn’t for the music. The music is like John Carpenter and 80s synthesizers which gives the movie a creepy vibe. Like the sizzling scare factor, the acting is restraint, only when you are involved in the terror sequences is when the acting begins to jump up. Many sequences also seem random, so there’s a feeling of chilling vulnerability.
I read a review saying the girl with the glasses, Yara, was unneeded, come to think of it, she really didn’t do much. Especially at the end when the action picks up and her leg gets shot. Great now you’re fighting something you can’t see with a limp. I did have some other problems with a couple parts. ( no real spoilers) When Paul uses a chair to hit the entity he does hit it and It throws him out of the way, or when he shoots It in the head and blood fills the pool – is this ‘entity’ supposed to have some kind of invisible body? Also, some scenes felt like they didn’t need to be there or dragged for a bit. There’s a sum of audience out there that don’t like slow movies and this has a couple of slow pace moments. I’m not bothered by slowness, cause I kinda am, but this is just a fore warning.
To be honest, I don’t like the buzz around the movie saying “It Follows is the scariest movie in a decade”. First of all, calm down, this movie had some really good bits and also subtle, but I wouldn’t hail it as the best. I think it’s better then many teen screams that have come out but this feels a little more adult oriented. I say give it some time, let the film sink into the American horror backdrop fabric, step back and see it for what it is. In time, I do think It Follows could be a cult classic. It does, however, deliver the terror and shock. It’s up there with Teeth and Contracted and in a way, is better than it’s sexual horror cousins.
All in all, this is a good movie. The entertainment is there and sure to satisfy your thirst for a scare. I’m wondering if there will be a sequel, just curious where it would go. Not saying it’s a necessity though, It Follows can hold it’s own. I recommend this for horror fans and paranoid people. *evil laugh*
Advertisement