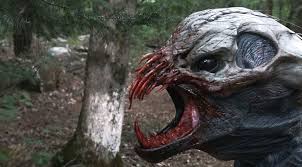 On the surface, Animal looks like your usual low-budget, monster B-movie. Underneath is pretty much the same. Not entirely bad, I might add, it stands out of the crowd just a tad. The movie features great creature effects that show off early on, if only it was matched by some good dialogue (if not campy). With a couple good kills and a simple as you can get storyline, Animal is sure to entertain some audience.

Animal follows the likes of Dog Soldiers and Predator. Although, the storyline is much simpler: teens go out in the woods for fun, they get lost and find a creature that has a taste for human flesh. They proceed to run away from this thing and manage to find shelter in a cabin where they meet another band of survivors. One of them has their noggin wound up a little too tight and makes decisions that will frustrate you and talking to the screen, ‘are you stupid?’ Because he makes choices like sacrificing people and making a run for it, we’re supposed to understand his blind decision making and insanity since his girl was killed off in the opening scene. But au contrar, I could care less. Kill the bastard. But what’s a horror movie without someone doing something stupid? I, for one, did not care for pretty much any of the characters. I pin that cause on the writing; it’s just so careless and lazy, it made the characters appear uneducated.

Many parts of the movie are predictable but for the sake of the other parts that are unexpected I won’t spoil anything for you. The surprise moments happen early on which makes the rest of the movie feel more vulnerable. Every boarded up window, closed door or ruffling bush leaves you an impression something is gonna happen but you don’t know when! Even some deaths can catch you off guard but somehow the shock value wears thin especially towards the end when things speed up. Vulnerability is still lingering in the atmosphere but the characters just get picked off in more careless acts of violence. Which the gore is reminiscent of Feast, similarly the animal compared to it’s ferocity. The animal itself is creepy at first, but shows it’s beastly-self far too often and the scare dies down. We become familiar with it’s movements all too soon. Good thing the special effects are good. If there is one thing Animal did right was showing the creature in prosthetics. I don’t remember seeing any or little creature related CGI. That’s one thing to make your monster more believable and devilishly cheesy. Creature features and other usual B-movie fodder use a lot of CGI, but what if they used prosthetics instead? I’m a believer that CGI doesn’t last as long as special make-up effects tend to do.

I looked at Animal hoping it wouldn’t become another failure like Creature with Sid Haig, fortunately Animal steps above it. The acting is so-so, given the script the actors had to work with. And I take back some of what I said, I thought Carl and Mandy were cool and didn’t want to see them go, one gets mauled (not a complete spoil) off screen. Subsequently, Animal is a small surprise that borrows ideas from other films, which is cool, I don’t mind that, I just wish the writing could have had more work done; it would have helped the execution. That alone I think is what will keep Animal from gaining a cult following. Unless they follow up a storyline that answers questions like: why is that cabin there? why are the creatures familiar with it? and where did they come from? But I’m expecting another military bio-project gone bad.

I recommend horror fans alike to give this a look, and any other audience members looking for an escape to the woods.