From Dusk Till Dawn still entertains me today. Over a decade later, I will come back every so often to this movie for it’s originality, abrupt twist, and George Clooney’s sheer acting ability. Before his peak with Kill Bill, Quentin Tarantino was at his best in the 90’s delivering fresh aura to cinema along with his indie buddy filmmakers wave. His crime caper vibe and cheesy hamburger dialogue married perfectly with friend Robert Rodriguez’s cool, rock and roll direction. These two combined a stylish crime nightmare that blended genres into one satisfying bite.

Straight off the stake this may not be for everyone. Not exactly a happy movie but an absolute brutal thrill ride. An entertaining punch to the chest that dishes out unexpected laughs and shock. The biggest diss I can find  the audience dislikes so much is the twist (and probably the gore). By the cover you can guess this isn’t your normal “escape the authority, brother, we just robbed a bank” type of flick. This I personally loved. My favorite bit of the movie is when it snaps your neck at a 180 degree turn and ship-shapes into a mythical monster. Some say this is when the movie loses it’s grasp. I say nay. From Dusk Till Dawn never loses sight of what it wants to be. From A to B the goal is always prominent.

Who doesn’t like a good heist film? Well, this is the aftermath of a bank robbery and you never get to see it like Tarantino’s classic Reservoir Dogs. However, you don’t have characters named after the colors of the rainbow.  From Dusk Till Dawn follows the Gecko brothers who must take the cash across the Mexican border without being caught and meet at the Titty Twister, leaving trail of fire and dead carcasses. Seth (Clooney) is the oldest brother with a temper but keeps it under a cool veil. This is a guy who has a book, a cool book, and you want to be in his cool book. This role here jumped Clooney’s stardom because of his on screen presence and cool demeanor. Although, I think Seth is almost as dimwitted as his younger brother, Richard, leaving him in a room with a woman alone. Richard (Tarantino) is a psychotic sex offender who has a knack of grinding his teeth. He is perfect in this role for being simultaneously weird and awkward. The two leads play well, but Tarantino is surpassed by Clooney’s espresso experience in acting. You can see this alone, clear as day, when Clooney forces Tarantino up against the wall in anger, skewing Tarantino’s glasses and Clooney keeps him from fixing them. Tarantino is not prepared for this and you can see his cowering bewilderment. It’s quite impressive to see. Speaking of impressive, Salma Hayek is a goddess. A sexy introduction for her as she steps on stage with a boa wrapping her seductive body and the music serenading and accenting her curves. Even this experienced actress leaves Tarantino with a foot in his mouth. 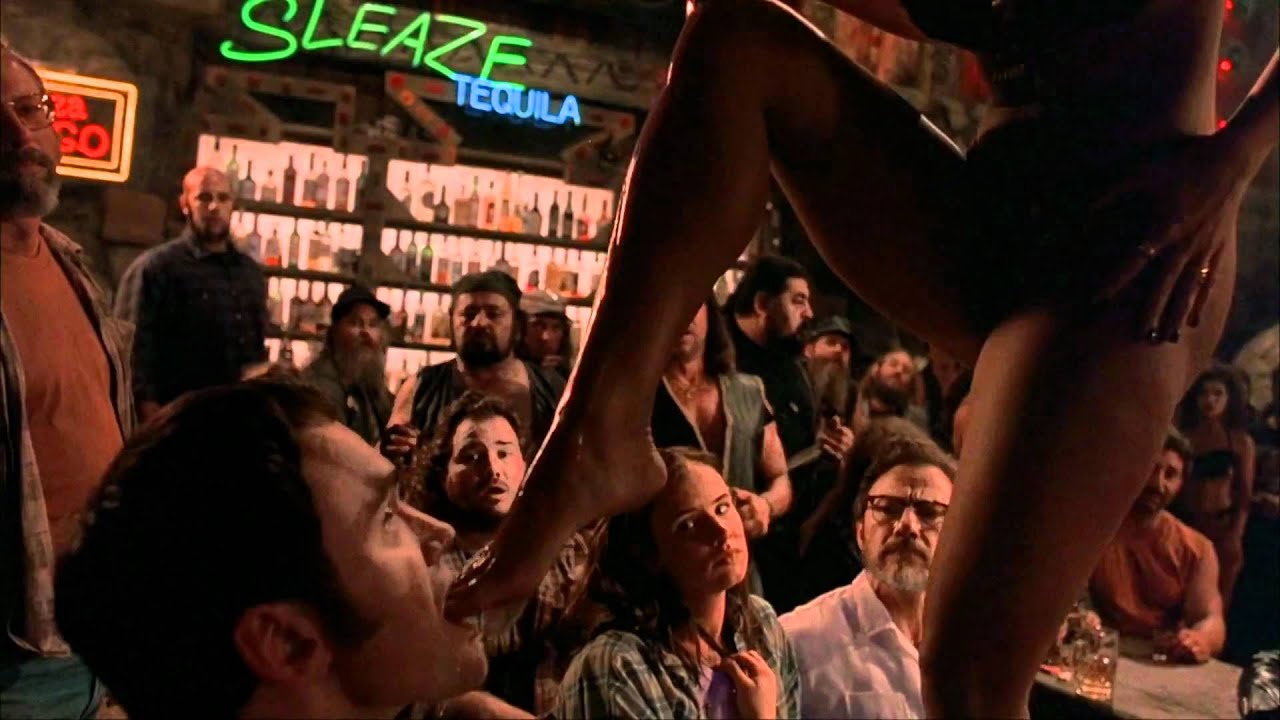 Everyone does there part. From the young Juliette Lewis as a daughter of faith to Harvey Keitel, a father who has lost faith. And lets not forget those two guys we randomly meet and start rooting for at the Titty Twister. Tom Savini as Sex Machine who fancies a whip and a secret weapon in the formation of his privates. Then we have Fred Williams as Frost who has an endless supply of cigars and talks about ‘Nam back in ’72.

Acting wouldn’t be without it’s writing and Tarantino has a script that not only makes us laugh but is cheesy. Like when Jacob (Keitel) is talking about his spirituality with his kids or when Seth is discussing how his .45 will answer questions. Tarantino’s writing can easily be put into a 24 episode anime or it’s own manga series. At times it’s delectable but sometimes it’s nonsensical and dare I say somewhat juvenile; however, his odd ideas ‘trademark cliches sticks out like a stylish smile with vampire fangs.

From Dusk Till Dawn will always be a movie I come back to, no matter how long. From the opening bad-a** credits to the closing. The last 45 minutes when the twist manifests itself is a total switch up and pushes the question “What if?” in cinema. A great throwback to grindhouse flicks and a great film in general.

On a side note, despite rather two lackluster sequels, my latest viewing made me realize this original could have a proper direct sequel. One focused on Lewis’s character, Kate. Her life takes a turn as a monster hunter after the events of this film. She eventually goes out to seek Seth for help, whether or not he helps or not, I think there is a sequel here. A monster hunt sequel, more than vampires. From Dusk Till Dawn can venture into other mythological territory with different storylines than stay with one tone. Then again, maybe that’s what makes this film so unique as a standalone.