A movie hailed by few, hated by many, and stuck somewhere on the middle ground with a few more. Many critics praised this movie giving it a lot of hype. Even the trailers looked promising. So, does it deliver? Yes and a resounding No. Ti West has a great idea on his hands, much like the rest of his films, but somehow they fall flat, or rather in this case, too short. House of the Devil has a slow but suspenseful build up that ends abruptly enough before we the audience can be satisfied.

Normally, I choose a different cover photo for movies so they can ‘stand out’ from the norm. However, the original cover looked so good I had to use it. It’s really what hooked me in to the movie and looked like it guaranteed a spooky good time. Yes, House of the Devil is quite spooky, even creepy. But this doesn’t happen towards the end. The beginning is when we meet a nice girl, Samantha, who needs to find enough rent for her new apartment. Job searching isn’t easy, but when she finds a babysitting job that’s in need of her presence, it’s all too good to be true. It becomes increasingly suspicious and unsettling what this job may actually offer. The actual atmosphere doesn’t settle in until we reach the house. Even then, when we meet the Ulmans who seem to be kind but something doesn’t settle right. Mr. Ulman seems to keep forgetting he’s told Sam the pizza number is on the fridge, like she should be comfortable and not leave. Mrs. Ulman is also kind, starting up a light conversion asking her questions as if nothing is to worry. The confrontation of this couple has an ominous darkness about them that fit inside the genre really well.

Although the house is full of brood and mystery behind every door, we watch Samantha become bored. We become bored. The Ulman’s are gone and it’s time for her to do her job: sit and wait. She meanders about a bit but nothing really happens. Did I mention House of the Devil is shot and set in the 80s? The song she plays by The Fixx “One Thing Leads to Another” fits the movie perfectly. But still, we’re stuck watching a build up to a bloody, horrifying climax. To be honest, It’s this climax that if it lasted for another fifteen minutes and didn’t end so abruptly, I’d say we would have a destined classic. Because then we could forget about the hour we spent waiting. It leaves you unfinished questions that happens to our main character. Time was spent liking this character and rooting for her then BOOM, that’s all folks. I like this movie but can’t help feeling cheated and wanting more. With a great premise that should’ve gone a little further. I’ll list my spoiling questions at the bottom, they need to be heard.

I have strong hope Ti West will have his breakthrough film, one that will sure enough become classic. He’s got it in him, he just needs to find his right ritual to conjure a demon of a film. Ti’s shots are very well orchestrated with perfect natural lighting. My favorite shot is when Sam is walking down the unlit hallway holding a knife. His writing is exceptional, too. It was strong, supported the movie, and  even the actors delivered. i also appreciate a director who edits his own films. You’re truly seeing someone’s vision. The last half hour was just creepy. Starting with the lights going out to the unrelentless pulsating frames is it’s darkest half hour. Its hard for me to recommend House of the Devil, It cuts off too soon to fully appreciate what happens and the slowness doesn’t help either. If you decide to watch it, it must be in the dark, late at night, so you can still see flashing images of mother’s face. 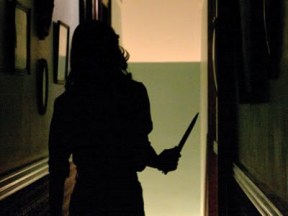 Does Samantha ever heal? And if/when she does What does she do with the child? Kill it or herself? Do people believe her story? Does she still get the apartment? Is there an investigation? Do they find the bodies? What was in the basement?? Is Mr. Ulman found? Does he take revenge? Possible sequel? Why did it end so soon??