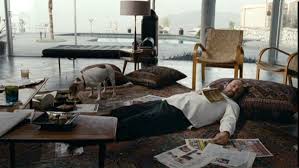 A delightful film. Sitting in my queue on Netflix since it’s release, I finally came around to watching Shrink. Over the years Kevin Spacey has become a favorite of mine, not just for his movie acting but his movie choices. Too bad I didn’t watch this film sooner, It’s a film about movies but more over about how the person next to us could be experiencing a bad time. Everyone goes through time and life differently, Shrink displays this very well and at the cost of two hours, you can spend your time enjoying yourself watching a story that intertwines with other stories. At a minor tempo pacing, the film unfolds at a calm, stoner pace; revealing a storyline thoughtful, heartfelt and honest.
Kevin Spacey is a therapist, Henry, who mostly has meetings with other celebrities; step in Robin Williams cameo, and is struggling over his wife’s death. His recovery consists of heavy pot smoking and drinking next to the pool. Poor guy needs a break but instead is slammed with the responsibility of a young girl who has also suffered a loss. They come to terms that going to the movie theaters is better than talking at an actual appointment. The rest of the story I will let you figure out on your own because it’s a journey worth going through. I’m one of those type of people who like to talk about movies within movies because movie in general are awesome. They can help gravitate to any means we mean necessary and interpret thoughts we occupy daily. Shrink looks at the different angles and explains the story it wants to convey through a simple form of dialogue. Many movies take this form, I’m just surprised by this small movie how it went and went above my expectations.
At times, a darkly comedic film with a rewarding cast. By the end of it all you feel everyone was a close family.
A movie recommended for those who enjoy showbiz flicks like movie buffs or just people looking for a calming, moving title. I like how the story held it’s subtle wit but kept it’s dramatic charm for a story. I myself like to aspire myself to be a filmmaker, one can dream, right? Until then, maybe I should get a celebrity shrink in the process.
Advertisement