Hot Rod. The humor is more deadpan than Audrey Plaza’s face. It has more expressions than any Adam Sandler flick. More chaos than being married to Satan. If Napolean Dynamite rode a pedaled motorbike instead of a horse and cranked everything to eleven, you got yourself a ticket to Hot Rod. With a heart for the 80s and a mind as random as a nonsensical totem fox on crack, Hot Rod delivers on multiple ultimate punches.

One day I was in a middle of a conversation with a friend and his girl. She was foreign and had seen Hot Rod and expressed she did not like it, stated it was too American. I wondered if perhaps some people don’t understand the humor. Or maybe they do and don’t care. It’s all cool beans.

On my latest viewing of Hot Rod I got the idea it was an 80s flick trying to break out. But was trapped in it’s own confines by being too similar to any other 80s nostalgia becoming it’s own classic by trying too hard. The result being utterly hilarious. A hormone disordered man trying to win respect of his step father. A simple thought turned to a riotous time of random, off-beat banter and slapstick humor too painfully funny for it’s own good. In a way, it’s a love letter and parody of some flick from the 80s.

I wonder how many takes it took to complete a single scene. Sometimes the idea is so off the wall I don’t have any idea how they kept a straight face. The story is just a ploy for Andy Samberg and crew to go off on their incoherent madness. From mimicking a bell by the pool to pronouncing the “h” in whords that start with “w.” It’s hard to keep up with the absurd jokes and antics through the first watch, they’re too legit to quit.

And by the end, Hot Rod delivers the ultimate blow to the digestive system. Cool Beans. 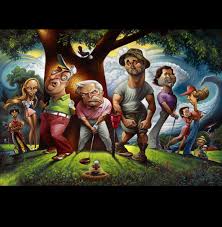